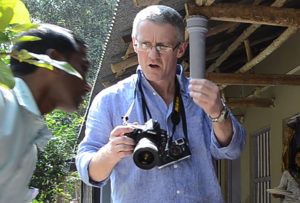 Paul has been a photographer for over 35 years, covering assignments for national and international newspapers and magazines.

His documentary photography has found him working on human trafficking issues in Asia where the impact of climate change continues to play a major role. The stark reality of how our actions affect others around the world has prompted Paul to try to promote a greater awareness at home of our impact on the world around us.

Along with Maureen McCoy, Paul co-authored the book Wild Swimming in Ireland, Collins Press 2016 and they also run outdoor swimming safety courses where they promote the leave no trace principles.