What’s With All the Dog Poo Bags?

Does your walk routine with your furry best friend look something like this?

Need a better way to carry it? Check out this video for easy ways to hold onto used dog poo bags until you can throw them away in the rubbish here:

We’ve discovered that there’s often no malice behind leaving poo bags on the ground. A lot of us have our hands full while walking our furry friends, so we decide to leave the bags and grab them on our way back. And then, as we’re thinking about getting to work or hurrying home to make dinner…we forget. In places where dog poo bags are commonly abandoned, we can create a new social norm, indicating that it’s okay to leave dog poo bags on the ground. A new dog owner or someone new to the area might see the bags and decide that this is a common and accepted practice. And bags that are touted to be “biodegradable” can lead people to think that it’s okay to leave them on the ground when, in reality, it can still take years for those bags to break down.

– Isn’t it worse to throw bagged poo in a landfill, rather than letting it decompose?

Neither solution is perfect. But with regard to the ecological ramifications of dog waste in our public spaces, here’s a few tidbits to keep in mind:

– Can I bury my dog’s poo on a backpacking trip?

If you’re in public area where agencies recommend digging a 6-8 inch cathole to dispose of human waste, then it is acceptable to bury your dog’s poop in the same manner. Because they do not decompose, dog poo bags should still be packed out.

Enjoy Your World. Leave No Trace. 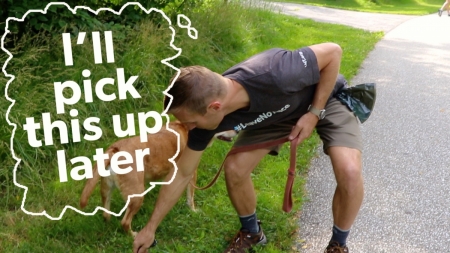