Volunteers do their bit for the big beach clean-up

Northern Ireland’s Environment Minister Alex Attwood pictured with some of the volunteers who helped clean up litter at Hazelbank at the weekend, including members of the First Jordanstown Scout group. The major clean-up was one of a number of events co-ordinated across Northern Ireland by the Marine Conservation Society as part of their Beachwatch Big Weekend. The Minister expressed his amazement at the variety of plastic debris and packaging that was found during the event. Picture by Stephen Hamilton, PressEye

DOZENS of volunteers got together at Hazelbank Park and Loughshore at the weekend for two beach clean-up events as part of the Marine Conservation Society’s (MCS) Beachwatch Big Weekend.

Supported by Newtownabbey Borough Council, the local clean-ups were among a number of similar events which took place across Northern Ireland.

Among those who took part in the initiative were Deputy Mayor Victor Robinson and Environment Minister Alex Attwood.

“Our coast is a great asset and we must keep it in good order. I have asked my officials to bring forward a marine litter strategy. We now have Clean Neighbourhoods legislation to help tackle casual littering on land but this doesn’t cover all the marine issues.

“We can all do lots to make life more pleasant for each other. When we head out for a day at the seaside remember – ‘Leave No Trace’. We all have a role to play in keeping our great outdoors the way we wish to find it,” Mr Attwood said.

Dr Robert Keirle, Pollution Programme Manager with MCS, joined in the foreshore clean up at Hazelbank, before moving on to other Beachwatch Big Weekend events.

“It’s great to join with the enthusiasts here on the shores of Belfast Lough. Government has made good progress towards a marine litter strategy. Local councils and user groups are taking a much more proactive stance towards protecting our coastline and our marine environment,” he added. 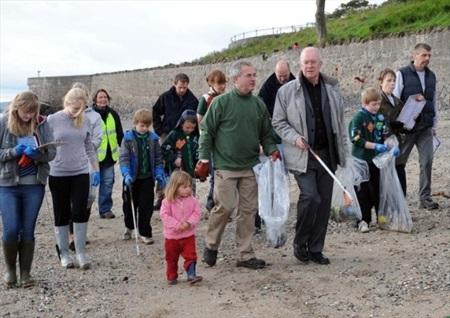