Forty Transition year students (15-16 year olds) from 8 secondary schools throughout County Wicklow came to the Education Centre in Glendalough to take part in a Leave No Trace Awareness Day on 8th October. The event was organised by the Wicklow Uplands Council (an independent grassroots organisation which brings together the various interests in the Wicklow uplands and Wicklow Mountains National Park Education Centre and supported by the Irish Uplands Forum and Leave No Trace Ireland.

On a beautiful sunny autumn day, just perfect for Leave No Trace training, the participants were encouraged to get to know each other through team working and were divided into four teams at the beginning of the day. As a warm-up activity the teams participated in a treasure hunt in the scenic surroundings of Glendalough. This activity raised their awareness about nature, wildlife and other attributes of the area which is protected and managed by the Wicklow Mountains National Park. Then the teams took part in a Leave No Trace Challenge Activity. This involved an educational walk and talk during which the participants learnt all seven principles of Leave No Trace. Through a range of activities they explored their connection with the natural world and developed an understanding of their impacts on the environment and other people. Outdoor activities such as mountain-biking, canoeing and hill walking are increasing in popularity in Wicklow therefore it is important that all users know how to act responsibly in the outdoors and in harmony with other people, wildlife and the natural environment.

The teams were awarded points for their challenges during the day and the scores compared. The day concluded with a quiz about Leave No Trace. The participating students enjoyed the day and learnt much about Leave No Trace which was reflected in their feedback: One of the participating children summed up the event by saying, “we learnt a lot, we learnt about how things we think are small problems are actually a lot bigger; learnt about conservation and consideration; to appreciate nature and the life that depends on it and how to act around wild animals”.

The organisers hope that the participating students will bring the idea of Leave No Trace back to their school-mates, teachers, friends and families and that the message of Leave No Trace will spread further. Wicklow Uplands Council recognises that Leave No Trace appeals to young people and would like to continue to raise the awareness of the project in future youth development programmes. 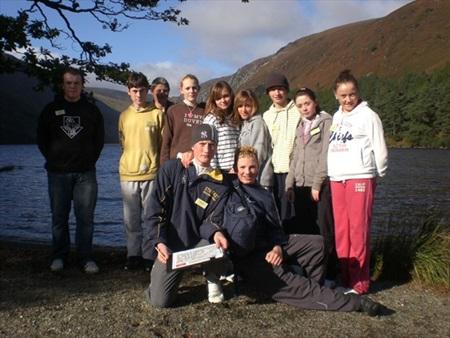