Target Training to the Water…

The ISKA is an organisation made up of sea-kayakers throughout Ireland, who are involved in meeting to explore and camp on the coastline and Islands and also are involved in sea-kayaking expeditions further a field.

The Leave No Trace principles are currently geared towards land-based activities, therefore a challenge for the instructor delivering this course was to take the principles and tailor them towards an environment of travelling on the sea, living outdoors and all associated considerations. Salt Island Bothy on Strangford Lough, Co.Down was the chosen location thus allowing a journey by sea-kayak to be included. The bothy also offered a dry and comfortable teaching environment with the added bonus of using an already established venue, hence minimising the impact.

The first principle ‘plan ahead and prepare’ was easily executed by a group of participants who have a vast pool of experience in canoe camping, however one element discussed was the food types that are bought by such groups. Conflict between the need to minimise weight and volume of food to be transported and the required longevity of food types meant that convenience items were often purchased. These items are over packaged and full of preservatives which affect the nature of the human waste that is left behind, overall affecting the creatures that make their homes in these places.

The venue allowed them to look at camping and all it encompasses from the use of fires, surfaces on which to put tents, the disposal of waste and leaving what you find. The use of fire grills and methods of reducing or completely erasing fire damage on the vegetation were tried, always with the idea of not exacerbating current damage or causing any new damage. The notion of the physical breakdown of human waste by sea action was also considered and as yet evidence to suggest that this is the way to go is still anecdotal, commercial providers felt that if ‘Wag Bags’ (a bag to dispose human waste in an environmentally friendly way) were readily available they would definitely encourage participants to use them.

“The passion of all the participants to act responsibly and in such a way to allow the continued enjoyment of the sea in all its colours was pretty inspiring” Stephen Millar. 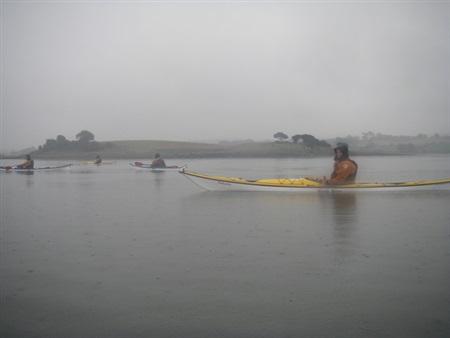