On Friday 21 September the Minister for Culture, Heritage and the Gaeltacht, Josepha Madigan TD, laid before the Houses of the Oireachtas new regulations that will help strengthen existing measures protecting the native White-clawed crayfish, particularly with regard to the importation of non-native species of crayfish

SI 354/2018, the European Union (Invasive Alien Species) (Freshwater Crayfish) Regulations 2018 (attached), targets the introduction of several species of non-native crayfish which have been included on the EU list of invasive alien species of Union concern (‘the Union list’).

​The White-clawed Crayfish is considered a globally threatened species and Ireland holds one of the largest surviving populations. It is a freshwater species found in many rivers and lakes in Ireland. It is the only crayfish species found in Ireland and is protected under both Irish law and the EU Habitats Directive. Throughout its European range, this species has been decimated by the impact of a disease called Crayfish Plague, which came to Europe with the introduction of North American species of crayfish in the 19th century.

Many North American crayfish species are resistant to Crayfish Plague so can act as carriers of the disease which is rapidly fatal when passed to the White-clawed Crayfish. There is no evidence to date that North American, or other non-native crayfish, have been introduced to Ireland and, until 2015, Ireland was considered free of the Crayfish Plague. The disease, however, has now reached 5 rivers in Ireland, possibly by spores carried on fishing equipment. The prospect of the disease being controlled depends on the absence of non-native crayfish.

The threat from introduced crayfish remains very high. Furthermore, if alien crayfish were to become established they would also have a severe impact on other freshwater species such as salmon and trout, on freshwater habitats (e.g. destabilising canal and river banks by burrowing), and the fisheries they support.

These important new Regulations will have an immediate impact in providing authorities in Ireland with the powers to prevent the arrival and spread of the five non-native species of crayfish included on the EU list of invasive alien species of Union concern.

NPWS urge anglers, canoeists and other water users to maintain vigilance with regard to crayfish plague, of which there have been a number of outbreaks over the last few years.

The simplest measure is to implement routine cleaning and drying of equipment once leaving a river, and before using it again. This is especially important as it is known that the crayfish plague organism can be carried on wet equipment to new sites. The ‘Check, Clean and Dry’ protocol is an effective barrier. All wet gear should be checked for any silt or mud, plant material or animals. It then should be cleaned and finally dried. Disinfectant or hot water (over 40C) should be used to clean all equipment followed by a 24hr drying period should be adopted as standard practice in all freshwaters. Drying is especially important, including removing of any water from inside a boat and disposing of it on grass. A drying period of at least 24 hours is needed to ensure that a boat is clear of infectious organism.

People are also asked to alert the authorities of any mass mortalities of crayfish, sightings of unusual crayfish (e.g. red claws, large size). Anyone who sees any dead or dying crayfish should report this to National Parks and Wildlife Service (www.npws.ie), Inland Fisheries Ireland (www.fisheriesireland.ie), or the National Biodiversity Data Centre (www.biodiversityireland.ie). 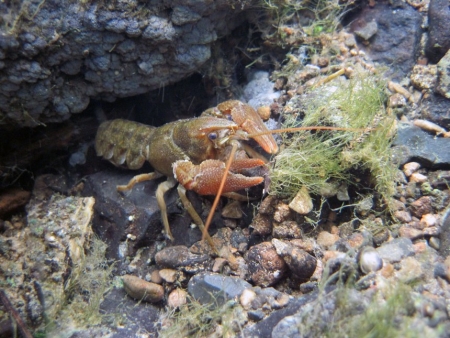