Westport, Mayo, 15th November 2017 – In Westport, Minister Michael Ring TD joined Coca-Cola to announce that Mayo Environmental organisation, Leave No Trace Ireland, in collaboration with Safe Haven Ireland, have been awarded funding through the Coca-Cola Thank You Fund for their ‘Breath of Fresh Air’ programme.

A total of €100,000 has been granted through the Coca-Cola Thank You Fund this year to 14 community groups across Ireland and Northern Ireland for innovative projects that will support and inspire young people.

Leave No Trace Ireland and Safe Haven Ireland are to receive a €10,000 grant for their joint project which aims to promote integration between communities in Ireland and empower young people at risk of social exclusion. It provides opportunities for young people from a variety of backgrounds, including refugees and asylum seekers, to take part in voyages along the Irish coastline on sail training vessels.

The judges selected this project for a larger grant as they felt that it was unique and compelling and that with the €10k investment the organisations could achieve a sustainable impact in their community.

Speaking at the announcement in Westport, Minister for Rural & Community Development Michael Ring, TD said: “I am delighted to be here today in Westport to recognise the great work that Leave No Trace Ireland is doing. It’s great news for them that they were one of the lucky recipients of a Coca-Cola Thank You Fund grant this year. I am truly humbled by the people working in communities, not just in Mayo but throughout the island of Ireland and believe that the impact of the work they do with young people has an immeasurable impact on our society and our natural environment. The best way to reach young people and help them acquire skills that they will use throughout their lives is by getting them involved with groups that serve their passions. Leave No Trace’s programme, for example, is designed to make a strategic and impactful intervention in young people’s lives and our communities stand to benefit as participants go on to set a positive example among their peer group and protect their environment.”

Ronan Farren, ‎Public Affairs and Communications Director, Coca-Cola Ireland thanked all the organisations who applied for Coca-Cola Thank You Fund grants this year:

“I congratulate each of the organisations responsible for these worthy and exciting projects and, indeed, commend all the applicants of the Coca-Cola Thank You Fund this year for their many brilliant ideas and for their considerable efforts aimed at empowering young people in Ireland and Northern Ireland. It is clear from the strategic approach and new thinking that we have seen in the proposals, that a lot of time and effort was invested in this process by those who participated.”

Ciara Cashen, ‎Public Affairs and Communications Manager, Coca‑Cola Hellenic Bottling Company said: “We are delighted to invest in young people in our communities but it is important to us that the funding provided through the Thank You Fund is a catalyst for new thinking and helps support the delivery of projects and schemes that otherwise might not happen. Leave No Trace Ireland was a particularly engaging application and at the pitch phase the judges were inspired by the ambition of the programme and the impact it could have on the youth participants. I wish the project the best of luck as planning to implement their project gets underway.”

Maura Lyons, Programme Manager, Leave No Trace Ireland said: “We are thrilled to have received €10,000 from the Coca-Cola Thank You Fund. Our project, Breath of Fresh Air, provides opportunities for young people from a variety of backgrounds to take part in voyages along the Irish coastline on sail training vessels. Young people growing up in Ireland today face multiple barriers to living healthy, happy and successful lives. Our programme tackles these issues by developing in young people the skills and behaviours that will lay the foundation for positive attitudes and behaviours throughout adolescence and into adulthood. We do this by exposing young people to new and challenging experiences in outdoor environments. All youths learn about the marine environment and their role in protecting it. Thanks to the funding from Coca-Cola, we are able to continue the work we do.”

Shauna Gillan, CEO, Safe Haven Ireland said: “New arrivals to Ireland are often at risk of social exclusion. As half of the participants on board are refugees or other recent migrants to Ireland, a cultural exchange is enabled as part of the project.  We have found sail training to be an ideal way to foster bonds between communities. Participants on board are thrown into an unfamiliar and exciting environment and leave the voyage having gained new skills. We usually see evidence of a heightened sense of self-esteem as well as better communication and team-working skills by the end of each voyage. Participants very often walk away with a new found love for the sea and the coastal environment, as well as an enhanced appreciation of the cultural differences, and similarities, between their different communities”

The Coca-Cola Thank You Fund is delivered in partnership with the Irish Youth Foundation and Youth Action Northern Ireland.

At the outset of the process this year, Coca-Cola commissioned research to establish the ambitions and concerns of parents of young people. The number one aspiration of parents for their child is that they create a life they enjoy and derive personal satisfaction from. Nearly two thirds of respondents said they worry about their child being led astray by their peer groups. The issues that parents worry about most are drug addiction (21%) and societal challenges such as employment (15%).

By investing in community groups that specifically target youth, Coca-Cola is aiming to support those who provide targeted interventions for young people, helping to keep them interested in certain activities or providing supports and networks that help them to make the right decisions as they move from teenage years to young adulthood.

Since the Thank You Fund was launched in 2011 it has invested a total of €855k in community groups and non-profit organisations throughout the island of Ireland.

More information about the Coca-Cola Thank You Fund is available at www.coca-cola.ie/thankyou. 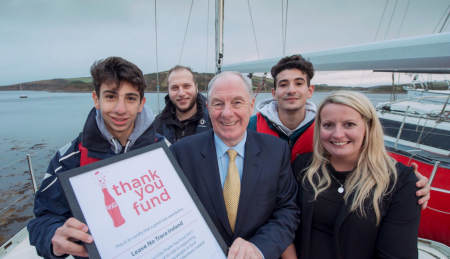 Previous Post
Leave No Trace runs Explorers programme in County Mayo, Sligo and Donegal
Next Post
Learn about our ocean wealth at The Ploughing Championships 2017
Menu