Shining a spotlight on TidyTowns groups who have gone the extra mile to promote responsibility in the outdoors, Louisburgh TidyTowns were announced as the winners of the Leave No Trace Special Award in the 2019 SuperValu TidyTowns competition.

Now entering its seventh decade, the competition, which is administered by the Department of Rural and Community Development and sponsored by SuperValu, continues to act as a catalyst for voluntary activity and community participation across the country. New this year, the ‘Leave No Trace TidyTowns Award’ is for any community group who has shown an appreciation for their outdoor environment and has taken action to promote responsible outdoor recreation.

Hundreds of entries were received this year from towns and villages throughout the country in the SuperValu National TidyTowns competition.  The announcement was greeted with great jubilation at today’s awards ceremony.

“This is a fantastic achievement for the ‘Keep our Beaches Clean’ initiative submitted by Louisburgh TidyTowns, Co. Mayo who are very deserving winners. This initiative involves the cleaning of 13 beaches in the Mayo area, collaborating with numerous volunteers, statutory agencies and extensive promotion through social media. The initiative extends to the recycling and up-cycling of materials collected while at the same time raising awareness of the issue of marine litter. Leave No Trace Ireland is delighted to see the large number of entries to the Special Award in its first year. Today, all that dedication and effort to the promotion of responsibility in the outdoors has paid off. The voluntary work that people put into their communities brings great pride, a great sense of achievement and great solidarity to those communities. Leave No Trace Ireland is proud to be a part of that”.

Leave No Trace Ireland is endorsed by Comhairle na Tuaithe, the National Countryside and Recreation Strategy, and the Northern Ireland Outdoor Recreation Plan as the only recognised outdoor ethics education programme in Ireland that promotes caring recreational use of the countryside. The Leave No Trace message has been adopted by key state and national organisations including government departments, state agencies and national governing bodies of sport, education and training and a range of businesses. These include the National Parks and Wildlife Service under the Department of Culture, Heritage and the Gaeltacht, Inland Fisheries Ireland, Sport Ireland, Coillte, the OPW, Waterways Ireland, Fáilte Ireland, the Department of Rural and Community Development and the Irish Environmental Network. 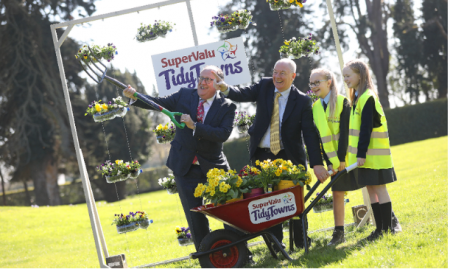