A new public awareness campaign from Leave No Trace Ireland and its partners calls on the public to exercise renewed care and responsibility when outdoors in managing dogs, preventing litter, and ensuring that there are no fires unless on a designated site.

As we enter summer, Leave No Trace Ireland – Ireland’s only outdoor ethics programme which promotes the responsible use of the outdoors – is encouraging everyone to ‘Love This Place, Leave No Trace’.

The campaign is asking the public to play their part by acting responsibly so that everyone can experience and enjoy outdoor spaces while helping to protect them from increased pressures this year as Covid-19 restrictions are lifted.

Speaking on the launch of the ‘Love This Place, Leave No Trace’ campaign, Minister of State for Heritage and Electoral Reform, Malcolm Noonan TD, said it is important that everyone who enjoys the great outdoors embraces the Leave No Trace ethos.

“As we all look forward to an outdoor summer, it’s more important than ever to protect the places we love and leave no trace. We have a duty to our environment, to wildlife and to each other to be responsible stewards of the natural world – our national parks, woodlands, rivers, beaches, mountains and everywhere in between.

“Loving nature, wildlife and the great outdoors means being thoughtful, prepared and proactive – packing a picnic rather than a disposable bbq that could cause a serious fire, bringing a bin bag to pick up rubbish that could otherwise harm wildlife, keeping dogs on leads rather than letting them go and potentially worrying farm animals or breeding birds, keeping our distance from wild birds, mammals and marine life and observing them without disturbing or disrupting them.

“As more of us seek the beauty, exhilaration and escapism of outdoor recreation, our collective impact on the environment also increases. By being responsible and leaving no trace, we can help the wild places and species we love to stay wild.”

“Covid-19 has reawakened our appreciation of the outdoors with huge increases in the numbers of people using public parks and the open countryside for recreation, exercise and enjoyment. However, this is also putting pressure on open spaces which is threatening the quality and protection of the outdoors that are also important habitats for wildlife and a working environment for farmers. This campaign appeals to everyone to be considerate and take individual responsibility for our own impacts on the outdoors”.

The public awareness campaign is being run by Leave No Trace Ireland in partnership with Sport Ireland, the National Parks and Wildlife Services under the Department of Housing, Local Government and Heritage, the Department of Rural and Community Development, the Office of Public Works, Fáilte Ireland, Waterways Ireland, Coillte, and Dublin City Council. The campaign will run on national and local radio and social media starting on June 28th and will continue throughout July.

Sport Ireland Chief Executive, John Treacy said participating in sport and physical activity in the outdoors leads to many positive outcomes and it is vital to respect out natural environment.

“We have a growing network of walking and cycling trails, forest parks and recreation sites, national and local parks, upland areas, inland waterways, beaches and coastal areas all affording opportunities for people to be active in the outdoors safely. We all enjoy the outdoors in different ways. Pay attention, expect to encounter others and be courteous. Park safely, keeping access open for landowners and remember to bring all waste home with you. Doing so ensures that our trails can be enjoyed by all.”

“We all love to get outdoors to exercise and be active so let’s ensure that we respect our communities and amenities by Leaving No Trace when we visit. As more of us staycation in Ireland this year we need to respect our natural environment which is one of Ireland’s greatest assets. Given the increase in people walking their pets at this time, I also want to remind all dog owners to act responsibly, keep their dogs under control and prevent dogs being involved in an attack on other animals including livestock, or causing alarm to others when outside”.

The campaign focuses on three critical pressure points which have become increasingly evident as greater numbers of people ‘stay-cation’ and use outdoor public spaces for recreation during the Covid pandemic. These pressure points include increased littering of the countryside and outdoor spaces, an increase in dog fouling, dog worrying and attacks on farm livestock as the numbers of pet dogs approaches an estimated 800,000, and the devastation that can be caused by fires from campfires and barbeques that get out of control. 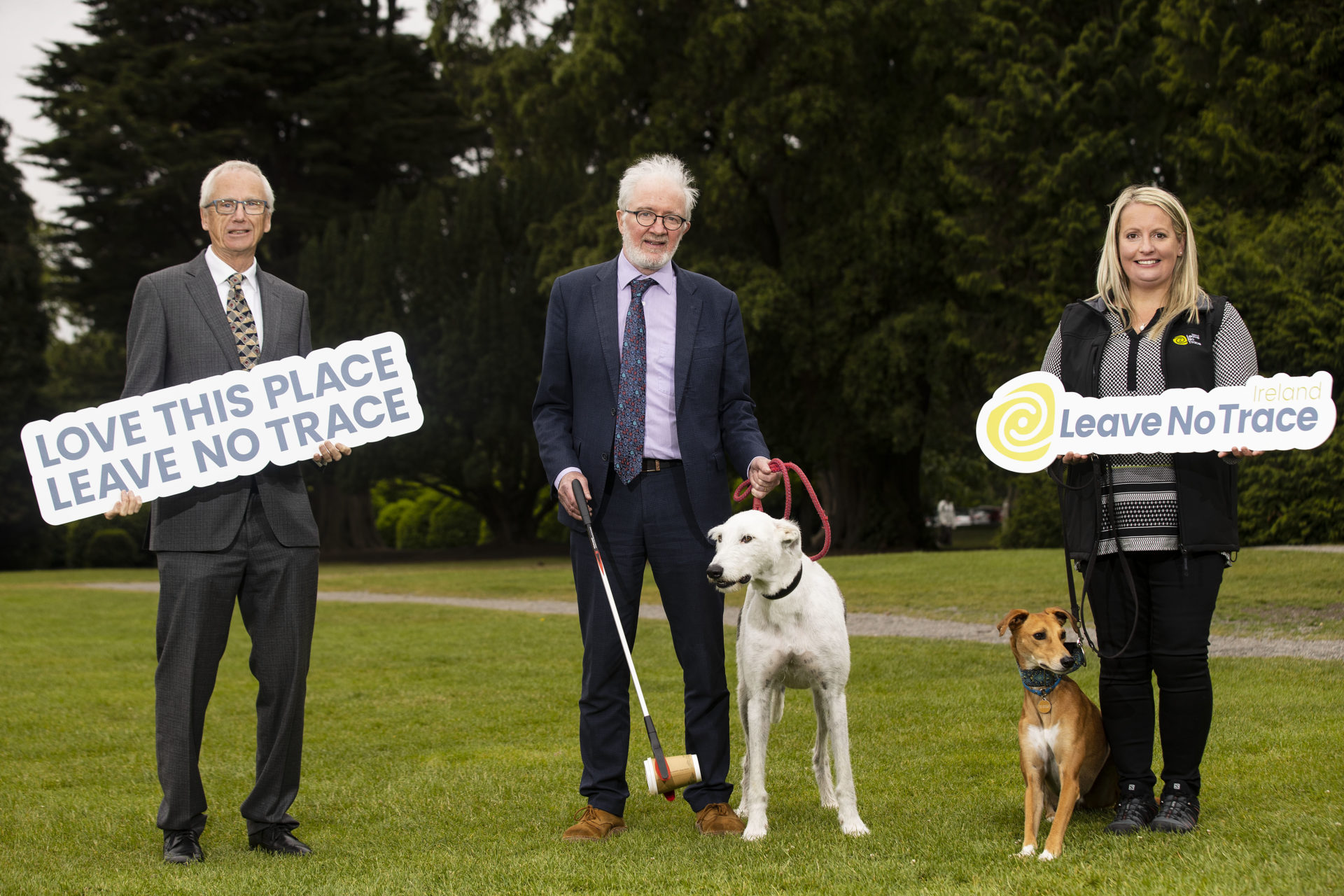 The Love This Place, Leave No Trace campaign will emphasise several key messages:

“We see the effects of littering in our beautiful national parks, nature reserves, forest parks, national heritage sites, rivers, beaches, forests and special areas of conservation as well as in urban areas and town parks. Small acts of personal responsibility can make a massive difference in the fight against litter, and everyone should bring a bin bag with them when planning a trip outdoors so that they can bring their rubbish home.”

The campaign is also appealing to dog owners to take extra care in controlling their pets and cleaning up after them.

“All the evidence points to an explosion in dog ownership. Many people are experiencing the joy of dog ownership and the companionship they bring for the first time. However, dog owners have responsibilities for the care of their pets and to the rest of society, and to non-dog owners in particular, to be considerate and protect public spaces from dog fouling.”

“Dog owners must be particularly aware that dogs can worry and cause stress to livestock which can result in physical injury and even death. Stress and injury can be caused even where dogs are with their owners and on a lead. We remind dog owners that it is a criminal offence under the Dogs (Protection of Livestock) Act 1953 if a person’s dog worries livestock on agricultural land.”

“The obligation to ensure dogs do not worry livestock falls on all dog owners and not just those dog owners engaged in recreational activities in the countryside. Indeed, sheep kills and other damage to livestock is more likely from pet dogs that are allowed roam from their homes and left unsupervised for prolonged periods.”

Finally, the ‘Love This Place, Leave No Trace’ campaign is placing a special emphasis on warning of the hazards of lighting fires in the open countryside, including the use of disposable BBQs.

“This year we have seen the devastation that wildfires can cause to forests and areas of spectacular natural beauty.  Carelessness in setting and using campfires and BBQs in the open countryside can quickly escalate into major incidents that can result in damage and destruction to wildlife and the environment. The Leave No Trace message is no campfires unless at a designated site. No disposable BBQs in the outdoors.

Information and guidelines for individuals, communities and organisations are available from the Leave No Trace Ireland website.  where you can also show your support and take the Love This Place, Leave No Trace Pledge.

Sport Ireland is the authority tasked with the development of sport in Ireland.

The National Parks and Wildlife Service is part of the Heritage Division of the Department of Housing, Local Government and Heritage who are responsible for managing the Irish State’s nature conservation responsibilities under national and European law.

The Department of Rural and Community Development’s mission is to promote rural and community development and to support vibrant, inclusive and sustainable communities throughout Ireland. The Department of Rural and Community Development acts as Secretariat for Comhairle na Tuaithe – the Countryside Council – which is made up of representatives from farming organisations, recreational users of the countryside and State bodies with a responsibility or interest in the countryside. Comhairle na Tuaithe endorses Leave No Trace.

The Office of Public Works (OPW) is a government office that delivers public services for flood protection, managing government properties and heritage services.

Fáilte Ireland is the National Tourism Development Authority and its role is to support the long-term sustainable growth in the economic, social, cultural and environmental contribution of tourism to Ireland.

Waterways Ireland is the cross-border navigational authority responsible for the management, maintenance, development and promotion of over 1000 km of inland navigable waterways, principally for recreational purposes.

Dublin City Council (Irish: Comhairle Cathrach Bhaile Átha Cliath) is the authority responsible for local government in the city of Dublin in Ireland. 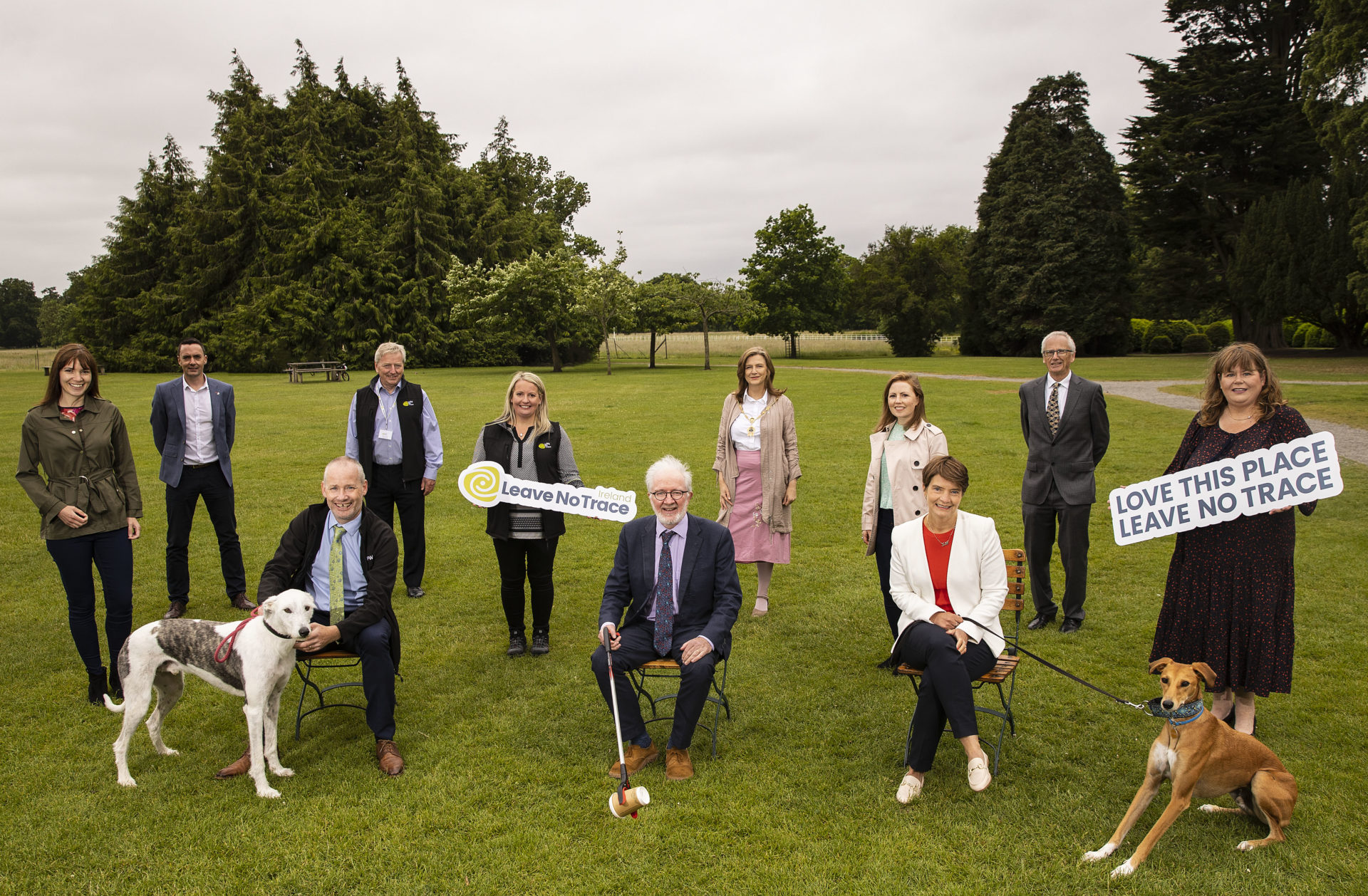