Duke of Edinburgh takes on Leave No Trace!

Cowper Lynas from The Duke of Edinburgh delivered Leave No Trace Awareness Sessions which were slotted into 2 Duke of Edinburgh’s Award Expedition Assessor Accreditation Courses. The first of these was held in Cnocnafeola Centre, Atticall, Kilkeel on 6th December and the second was held in the new Girls’ Brigade Headquarters near Junction One in Antrim on 14th March. There were about 24 participants on each course which was organised by the Duke of Edinburgh specifically for those who wished to become accredited expedition assessors.

The aim of the Leave No Trace Awareness Sessions was based on four learning outcomes:
• To develop the awareness of the possible impact on the environment caused by Duke of Edinburgh expedition teams.
• To consider ways of minimising this impact taking into account the 7 principles of Leave No Trace.
• To investigate the disposal of campsite litter and human waste.
• To develop an awareness of the ‘waste timeline’.

The session began with a practical exercise in which each of the 4 groups of participants were asked to record on ‘post-it notes’ the types of impact that a Duke of Edinburgh Gold expedition team would have on the environment. A typical day was represented pictorially on a long strip of wallpaper and each group was then asked to stick their ‘post-it notes’ where they thought the particular impact was likely to occur, for example, litter at the camp site.

This information was then used to discuss how impact might be minimised with reference to the 7 principles of Leave No Trace and to introduce the other issues of dealing with camp litter and disposing of human waste. Another exercise completed the session in which individuals were asked to match articles to time taken for decomposition on a waste timeline. Feedback received from those taking part was very positive. They felt the session had clearly highlighted the impact that Duke of Edinburgh expedition teams could have on the environment and the part assessors could play in minimising the effect especially in relation to the camp site area.

A Leave No Trace Awareness Session has now been accepted as a very worthwhile element of the Duke of Edinburgh Expedition Assessors Accreditation Courses in Northern Ireland and it is hoped to develop it further throughout the organisation, for example as part of training for expedition supervisors, who are ultimately responsible for the young people on expedition and consequently have a large input into their preparation. It is also hoped that it will be possible to introduce Leave No Trace Awareness Sessions into the Education and Library Boards’ hill walking training for teachers and youth leaders who can then be encouraged to pass on the 7 Principles of Leave No Trace to the young people themselves.

For more information on The Duke of Edinburgh please visit www.dofe.org. 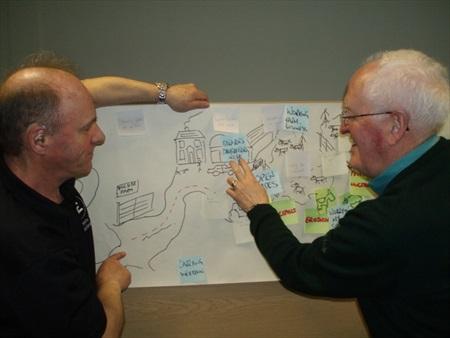