Leave No Trace Ireland attended ‘Cool Earth’ which is part of the Festival of World Cultures in Dun Laoghaire in late August. Dún Laoghaire-Rathdown County Council’s Environmental Services Department organised Cool Earth 2008 as part of the festival, calling it a two day environmental exhibition. Along with guest speakers and musical interludes Cool Earth featured exhibition stands by organisations and businesses working to combat climate change through global thinking and local action, all hoping to illustrate the simple ways to reduce our carbon footprint!

Over the two days there was, as always, huge interest and willingness to discuss the issues of Leave No Trace. We all engage with the outdoors and in an area like Dun Laoghaire where the sea and the mountains form part of the boundary it was interesting to broaden the discussion and shift the focus a little more towards everyday recreational activity and how we operate daily in the outdoors, to see what the response was. For many, the outdoors represents where we go to have fun, try something new and engage in sporting pursuits. Although the flexibility of the principles and their ability to speak to each individual on some point allows the programme to get people to think about how they behave when they engage with the outdoors locally by walking the dog, going for a run, a cycle, a walk in an urban park or along the coast, is our behaviour different or the same? A range of visitors to the stand included walkers, fell runners, bikers, climbers, scouts and guides, teachers and employees from the Department of Agriculture. 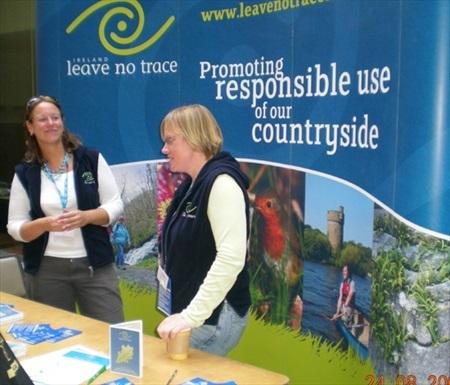