Compass Club by Coillte is a new afterschool initiative to get kids back into nature by providing a fun foundation in outdoor skills and activities and Leave No Trace Ireland .

Hours in front of a screen, less time playing outdoor and a society faced with the concern of ‘stranger danger’ has led to a generation of children who simply don’t have the freedom to explore the natural world around them, according to new research from Compass Club by Coillte which is a new afterschool outdoor programme in Irish forests nationwide designed to help children to grow a love for the outdoors , through fun experiences and activities that get them out and about with their friends and develop essential life skills that stick with them for life.

Half of children in Ireland (51%) only spend 30 minutes or less playing outdoors after school and parents overwhelmingly admit (64%) that this is far less than when they were children.  This worrying trend is leading to what has been termed ‘nature deficit disorder’ amongst a generation of children.

Children are missing out on life forming nature experiences with the research showing that almost half (45%) have never climbed a tree, the same portion (48%) have never gone walking in a forest with friends, almost one in three (62%) have never pitched a tent, more than two thirds (69%) have never toasted marshmallows over a fire, almost three quarters (74%) have never sat around a camp fire and a staggering eight in 10 (84%) have never used a compass.

Compass Club, from Ireland’s forest management organisation Coillte, have developed a unique new afterschool programme of outdoor skills for 6 to 12 year olds taking place in 47 locations nationwide from 19th September 2016.  The clubs take place in Coillte forests mainly and are designed to encourage exploration and discovery in a supervised environment with small group sizes creating a greater sense of freedom.

The child-led courses are built on the principles of strength based education and the syllabus is designed to develop problem-solving, critical thinking, inquiry and investigation, spatial awareness and sensory perception – all with a healthy dose of fun.  For kids, they get to pick up school curriculum skills in an environment that couldn’t be any different from a classroom.  Their awesome forest adventures include everything from navigation, knot skills, rope swings, scavenger hunts, games, building shelters, learning about habitats and toasting marshmallows.

Key findings from the new research from Compass Club by Coillte show:

Emma Godsil of Godsil Education is a child psychologist, behavioural specialist and an expert in strength based education who contributed to the development of the Compass Club by Coillte course syllabus.  She explains:

“This research demonstrates that our changing lifestyles are depriving children in Ireland of the many positives which we all experienced playing outdoors when we were growing up. Extensive international research concludes that outdoor learning contributes significantly to raising standards in education and improving children’s personal, social and emotional development.  The underlying strengths based philosophy that Compass Clubs are built around, combined with the well documented benefits of outdoor education, make these afterschool courses a very unique offering for parents and children.”

‘We are very proud to partner with the Compass Club by Coillte . The courses give over 3,400 children awesome adventures in Ireland’s pristine woodlands and tteach them skills and awareness that will stand to them for life. We are delighted that each child  learns about how to protect these special places and learns about Leave No Trace’.

Further information on course locations and September start dates can be found at www.CompassClub.ie. Each school term has a different theme with new experiences and skills. Afterschool Courses are six weeks long, 12 hours with a two hourly session one afternoon per week, and cost €120. 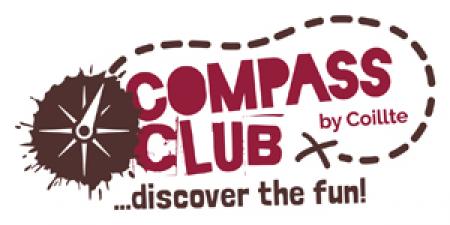 Previous Post
IMPRINT+ A new innovative project combining science, IT and nature conservation from Leave No Trace Ireland
Next Post
Working for Wellbeing of People and Place
Menu