Members of staff from the John Muir Trust are taking to the slopes of Ben Nevis dressed as bananas to ask people to take their litter off the mountain.

Sarah Lewis, one of the Trust’s Conservation Officers at Ben Nevis (aka Bananaman), said: “We’ve been talking to walkers going up the hill about the effect that organic litter can have on the environment. There’s been a great response to the costumes so far. Hopefully they’ll make the message stick in people’s mind.

“A lot of people who wouldn’t normally dream of dropping litter don’t realise that things like banana skins and apple peel are creating a big problem for the local environment. We want people to take the ‘leave no trace’ approach, which means if you carry something up the hill, you should take it back down with you.”

The anti-litter message is becoming increasingly important for Ben Nevis – 18 sacks of rubbish were collected by volunteers during the most recent clean-up of the Ben and 10 of these were full of banana skins. Organic waste has a real impact on the ecology of sensitive upland environments.

Sarah Lewis explained, “Bananas have a lot of potassium in their skins which can change the soil composition. They have a hard time biodegrading in rocky and cold upland environments and can take up to two years to fully decompose.

“Scavengers such as herring gulls and crows are doing better on the summit plateau and other litter hotspots than they would naturally solely because of the amount of edible rubbish that gets left. These species are displacing native birds such as snow bunting and ptarmigan.”

The Trust’s Banana Awareness Campaign will run throughout the summer months. Visitors to Ben Nevis shouldn’t be alarmed to see human-sized yellow dots at the foot of the Ben but should be on the look-out for the more troublesome ordinary banana skin being discarded in the wrong place. 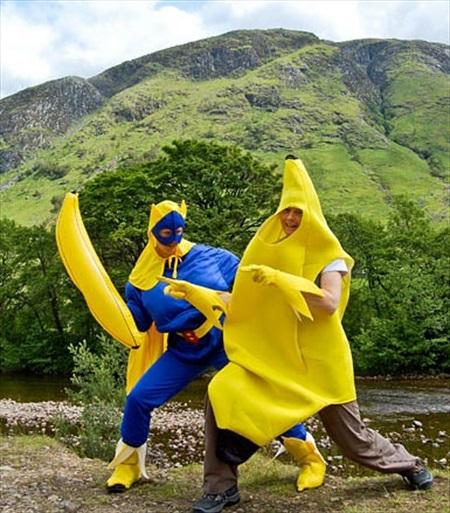